The Wicomico River, specifically port terminals in Salisbury constitute Maryland’s second busiest port by tonnage, after Baltimore, and the port area plays an important role in supplying fuel, aggregate, and agricultural products to the Delmarva peninsula. The Wicomico River’s navigable channel is congressionally authorized to be maintained up to a depth of 14 feet, with a width up to 150 feet. Currently, the terminals on the Wicomico River are privately owned and operated, and the cargo they handle is dedicated to their respective firms. However, there may be benefits to providing additional industries on the Delmarva peninsula with opportunities to access to barge shipping through the creation of a publicly-owned multi-user port terminal. 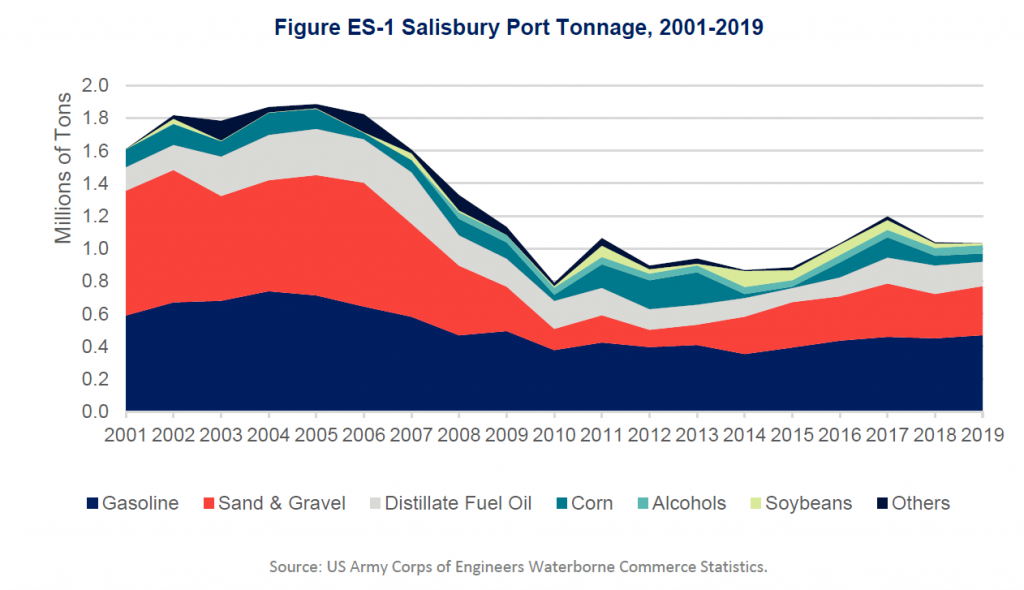 In November 2020, City officials engaged CPCS Transcom in a Port feasibility study to look at the growth opportunities for the Port of Salisbury. The potential benefits of a port terminal’s development are many: better transportation connectivity, and increased transportation options, can help lower shipper transportation costs, reduce transit times, and increase supply chain reliability – key enablers of supply chain competitiveness. This can help increase overall shipper competitiveness, and the region in which they operate. This can also lead to greater investment, growth, and jobs.

The study concluded in October 2021 and the report in its finality can be viewed here: Salisbury Port Feasibility Study – Final Report.

From this report, the City garnered the following:

Project Background
The Delmarva Freight Plan identified Salisbury as a freight hub for the southern Delmarva peninsula, and Salisbury’s port terminals are key links in supply chains for fuel, aggregate, and agricultural products. However, port traffic has declined since the early 2000s, reaching a recent low point following the 2008 recession. Given the cost benefits of maritime shipping for large or bulk cargo, and potential economic benefits associated with a greater choice of shipping options for businesses, the City of Salisbury and its partners are interested in the development of a multi-user port facility that could serve multiple industries and multiple cargoes. This project sought to determine the market demand and physical feasibility of a potential multi-user or multi-cargo port terminal in the Salisbury area.

Current Port Assets
Salisbury currently has six privately-owned maritime terminals or facilities. In 2019, these facilities handled just over a million tons of cargo.

A key maritime asset for Salisbury is the navigation channel of the Wicomico River, which is maintained by regular dredging. This dredging work is supported by the US Army Corps of Engineers and is critical for facilitating commercial navigation on the river. The US Army Corps of Engineers designates navigational projects that support more than 1 million tons each year as “economically significant” and provides more consistent dredging support for these projects. Therefore, ensuring that tonnage remains over 1 million tons each year is an important consideration for sustained support of Salisbury’s marine transportation system.

What Port Development Can and Can’t do for Salisbury
Based on an analysis of commodity trends in the Salisbury area and consultations with water-served industries, there are regional businesses that may be interested in using a new multi-user port terminal in Salisbury. These industries include aggregate and agricultural products. Given the complex dynamics of port development, Salisbury has an important role to play as a coordinator among potential users of a multi-user port facility. If the City chooses to develop a multi-user port terminal, some potential benefits are possible:

Recommendations
If the City of Salisbury wishes to engage in port development to unlock the opportunities above, it should consider the following approaches:

Potential Impacts and Benefits of Port Development
Potential benefits can only be realized through investment. Based on preliminary engineering work, a multi-user port terminal on Marine Road that supports the movement of dry bulk cargo would require an upfront capital investment of about $22.8 million. This investment includes improvements to the site, waterfront mooring area construction, and improvements to Marine Road. In addition to this investment, an estimated $271,000 per year would be needed to support the work of a port administration to manage the property and conduct business development.

The creation of the port facility is expected to increase tonnage handled at Salisbury between 50,000 and 125,000 tons per year. In turn, this increase in tonnage would generate between 2,000 and 4,700 additional truck trips each year. Additional truck and barge traffic would impact residents who live near the port and Marine Road, and improvements to Marine Road have been proposed to mitigate some truck traffic impacts.

In exchange for this investment and the impacts of additional truck and barge traffic, the City can expect to unlock a variety of opportunities and benefits. Many of the potential benefits of the multiuser port facility relate to the expected increase in tonnage and its role in sustaining tonnage at a level that ensures regular US Army Corps of Engineers’ support for dredging. If river shipping was not an option, cargo currently handled by barge would generate between 38,000 to 40,700 additional longer-distance truck trips on the Delmarva Peninsula each year. Moving cargo by truck and rail is  less energy-efficient than barge shipping and would result in more emissions, more spills, damage to road infrastructure, and higher commodity prices for residents. Preserving water transportation and dredging support will also preserve employment for over 100 employees at firms that currently
use water transportation.