As part of the City of Salisbury’s goal to become the first Bird City Maryland on the Eastern Shore we will be selecting our very own bird that represents our commitment to a sustainable and healthy community for birds and for people.  Your vote between now and Saturday, October 3rd will help us determine which of the five species in the running will be named the Official Bird of Salisbury! Will it be the iconic Great Blue Heron or the aerial acrobat the Chimney Swift? How about the amazing Osprey, outgoing Red Bellied Woodpecker or the stunning Cardinal? Read more below and cast your vote today! The winning bird will be announced by City Administrator Julia Glanz as part of Maryland Bird Day LIVE on Friday, October 9th.

Voting has ended, tune in to Maryland Bird Day LIVE this Friday, October 9th for the announcement of Salisbury’s official bird. 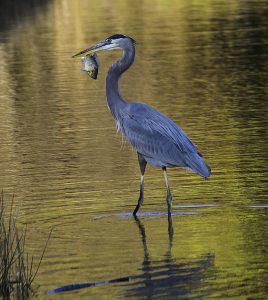 Great Blue Heron – Although many individual Herons are migratory, Great Blue Herons are found year-round in Salisbury and Wicomico County. Although more common in summer, winter populations vary with weather, but Wicomico always has some here. A Great Blue Heron rookery is located at the Salisbury Zoo (usually about 15 nests). They can be easily seen feeding on local ponds and streams, including the Wicomico River in Downtown SBY. 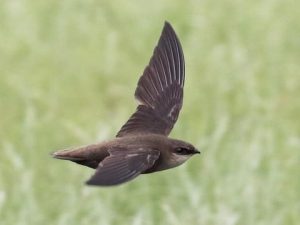 Chimney Swift – A summer resident, the Chimney Swift typically arrives here in April and stays until early September. They nest in chimneys and, during migration, roost at night in large groups in chimneys. If a roosting site is known, it’s very exciting to watch (soon after sunset) a large group circle around then all of a sudden descend into the chimney. Swift numbers have been declining in recent years (here and in general) and there is a move to erect swift towers to help with that problem. 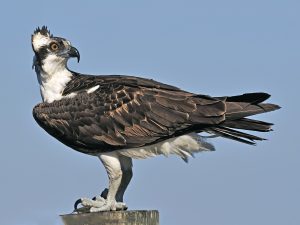 Osprey – A summer resident here, Ospreys arrive in about mid-March and stay until early-mid fall. There are quite a few pairs that nest along the Wicomico River and other local rivers (esp. on channel markers, etc.), even in Downtown SBY. They are very easy to see during their nesting period.

Northern Cardinal – The Northern Cardinal is a very common, year-round resident. Almost everyone with a bird feeder will attract cardinals to their yard. They have two or three broods of young per season. The breeding season starts with males singing, usually in February, one of the early signs of spring in the area. 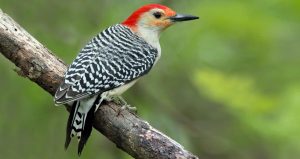 Red-bellied woodpecker – One of the most common woodpeckers in the area, they readily come to backyards with feeders. Like all woodpeckers, a pair of Red-bellies excavates a new nest each year and the vacant nests from previous years can be important nesting or roosting sites for other species.