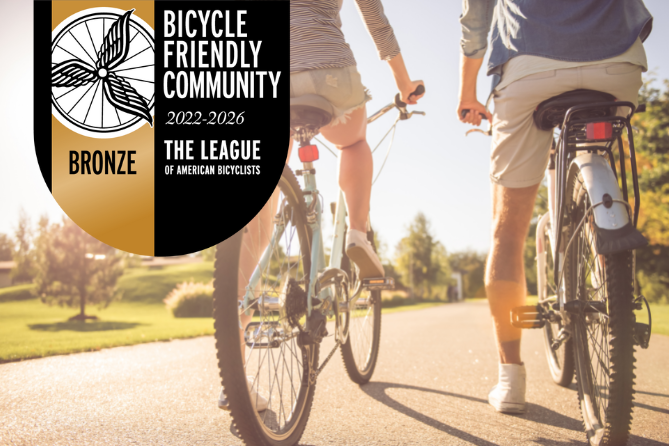 Salisbury–Mayor Jake Day is proud to announce that the City of Salisbury has been designated a bronze-level Bicycle Friendly Community by the League of American Bicyclists, one of 501 communities across the country recognized by the organization in a movement towards safer, more accessible streets for all.

The Bicycle Friendly Community award recognizes communities with a commitment to improving conditions for all people who bike through investments in bike education programs, bike events like Bike to Work Day, pro-bike policies, and bike infrastructure. Awarded communities must renew their status every four years to ensure that they maintain existing efforts and keep up with national safety standards and community-driven best practices. This is the third consecutive term that the City of Salisbury has received the award, after two bronze awards in 2016-2019 and 2019-2022.

“Building an America where bicycling is truly safer and easier for everyone means strengthening our nation economically, environmentally and socially. That’s why we’re proud to celebrate both new and renewing Bicycle Friendly Communities joining our movement to build a Bicycle Friendly America for everyone” said Bill Nesper, executive director of the League of American Bicyclists. “This round of awards is also a testament to the community leaders and local bike advocates who are joining the League in raising its standards of what it means to be a Bicycle Friendly Community.”

The application, which was updated and expanded in summer 2022, included questions about equity and accessibility, and placed more emphasis on the importance of building low-speed and low-stress bike networks. Each of the five levels of the Bicycle Friendly Community award–diamond, platinum, gold, silver, and bronze, plus an honorable mention category–provide a clear path for cities and towns to continuously improve.

“Thank you to the League of American Bicyclists for this honor, and for recognizing the hard work of our community and our Department of Infrastructure and Development. As one of seven Bicycle Friendly Communities in Maryland and the only one on the Eastern Shore, we’re proud to be a community leading the way to safer, more accessible streets,” said Mayor Jake Day. “By building our low-speed bike network on high-injury streets as identified through our Vision Zero plan, we aren’t only making travel easier for cyclists in our city. We’re making our streets safer for each and every person who uses them–on two wheels or four.”

The City of Salisbury is also home to Salisbury University, one of three universities in Maryland designated a Bicycle Friendly University.