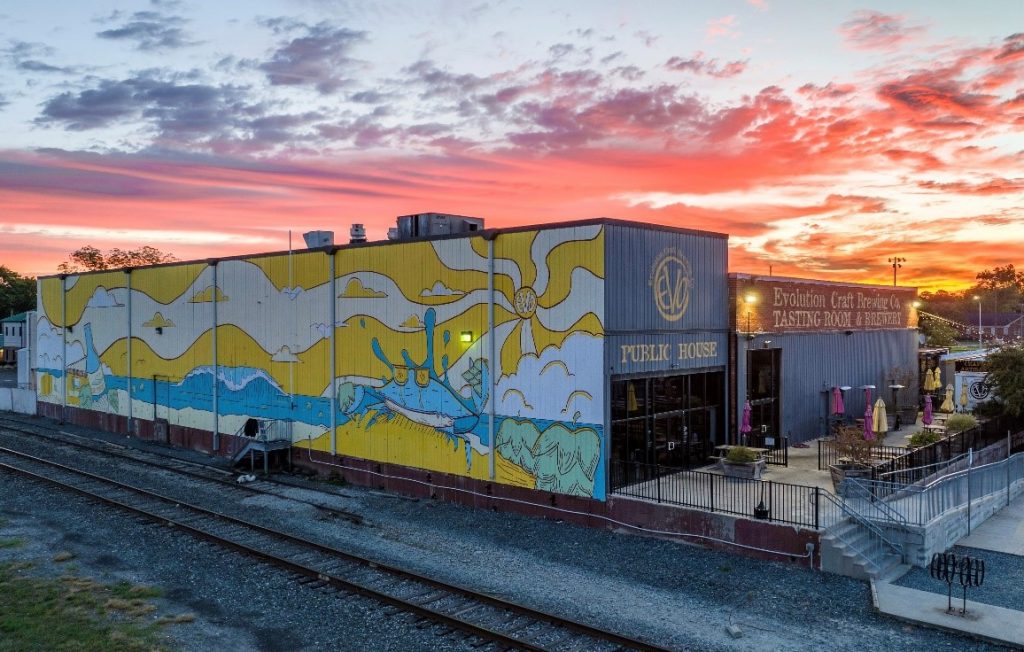 The western-facing wall of the brewery and restaurant, which abuts Route 13 and TidalHealth Peninsula Regional Medical Center, is now home to a 35-by-145 mural, the City’s newest public art installation.

Local artists Brandon and Deserea Martin, owners of We Are Limitless Studios, were selected from a pool of four artists to complete the mural. Peter Mueller was brought on to digitally design the mural, which was then applied and painted by the Martins. The mural depicts items and themes central to both Evolution Craft Brewery and our region, including a crab, the City of Salisbury logo, the beach, a beer bottle, and hops.

“[We completed the] literal biggest undertaking of our career all while dealing with some of our own momentous personal challenges. We will never forget this project and the opportunity bestowed upon us to bring about this creative energy to Salisbury, MD,” said Deserea Martin.

The mural was first proposed by Brent Miller, Executive Director of SVN Miller, to Mayor Jake Day in April 2021 after neighboring trees were removed during the construction of Chesapeake Utilities’ gas pipeline. The City of Salisbury, Chesapeake Utilities, and SVN Miller agreed on the project, and work began in early 2022.

“We are proud and honored to be a part of this mural project!  Being in the commercial real estate business, it is always exciting seeing a building transform into something special for the community,” said Brent Miller. “When we saw the bare exterior wall after the installation of the new gas lines, we saw an opportunity.  In such a prominent location, the wall was a perfect canvas to add to the Salisbury art scene. I hope the design brings joy to the residents and visitors of Salisbury, and to the patients at TidalHealth Peninsula Regional Hospital,” Miller added.

“I am proud to work with SVN Miller and Evolution Craft Brewing on this project, and excited to introduce a new mural to our City,” said Mayor Jake Day. “Public art is not only something nice to look at, but it’s something that unites our community and fosters a sense of belonging. This mural and its prominent place along Route 13, in one of our City’s busiest areas, will allow thousands of people every day to interact with art in a way they may not usually,” he added.

The year-long project was spearheaded by Alyssa Shockley of SVN Miller and Jamie Heater, Executive Director of the Salisbury Arts and Entertainment District. Together, the two vetted potential artists for the mural, a process which took 8 months.

“This project was truly a community effort. We appreciate We Are Limitless for their expertise, The City of Salisbury for all their guidance, and Chesapeake Utilities for their continued support,” said Alyssa Shockley. Additional contributors to this project include Evolution Craft Brewery, Carload Express, Inc., Justin Hart with SVN Maintenance, and Chris Bostwick of Iron Source.

About City of Salisbury, MD

Founded in 1732, Salisbury is the county seat of Wicomico County, a place where John Smith touched land in 1608 during his exploration of the Chesapeake Bay. Situated on Maryland’s historic Eastern Shore at the crossroads of the Delmarva Peninsula, Salisbury is now one of the region’s largest cities, and serves as the capital of the Eastern Shore, a rural area defined by its agricultural and maritime traditions, landscapes, and industries. The Chesapeake Bay is central to this distinctive identity. Though a relatively small city, Salisbury is the geographic and economic hub of one of the nation’s fastest-growing Metropolitan Statistical Areas. Led by a dynamic mayor, the City of Salisbury is working to build its reputation as an arts and culture destination, and is aligning its downtown development and revitalization efforts with the arts.

Evolution Craft Brewing Co, a leader of the Culinary Craft Beer movement, was founded by Tom and John Knorr in 2009. The brewery started in Delmar, Delaware and moved to Salisbury, Maryland in 2012 to meet growing demand. Evolution’s inspiration was born out of the Knorr brothers’ passion for pairing the great food at their restaurants with great craft beers.