Salisbury – Mayor Jake Day is pleased to announce that the City has chosen Caroline O’Hare as Salisbury’s Local Manager for the National Folk Festival. Caroline was selected from a field of over a dozen candidates who applied for the position.

Caroline has proven her production management skills in some of the most challenging and highly-regarded production environments throughout her career—notably as the Creative Director for Live! With Kelly and Michael, where she produced daily promotions, gave direction to on-air talent, and oversaw a team of editors and graphic designers. Prior to working with Live!, Caroline was a Senior Writer and Producer for The Wendy Williams Show, and a Producer for MTV/Viacom.

After moving to Salisbury, Caroline was employed as the Administrative Head of Wicomico Day School. In addition to supervising the daily activities of staff and students, she facilitated the overhaul and updating of the school’s communication platforms, and developed and implemented marketing strategies for the school. As Administrative Head, Caroline was the liaison between parents and faculty, and oversaw the school’s multiple fundraisers and events.

As Salisbury’s Local Manager for the National Folk Festival, Caroline will be the City’s direct line to the National Council for the Traditional Arts (NCTA) to ensure that the Festival is a remarkable success for the entirety of its three-year residency in Salisbury. With myriad essential tasks which require constant oversight, the position demands that the Manager serve in multiple capacities, switching gears frequently, all while maintaining a sharp eye for detail. In addition to representing the festival, writing grants, and communicating with media outlets, Caroline will supervise the marketing of the festival and will work with the City, the NCTA, and the Festival’s Executive Committee to create fundraising materials.

“I am so excited to welcome Caroline as our Local Manager for this festival that will be unlike anything Salisbury has ever experienced,” said Mayor Day. “The National Folk Festival will bring a very large, very diverse offering of music, folk art, food, traditional crafts, and much more to Salisbury over the next three years. Managing such a large event takes a unique skillset, and Caroline’s wealth of knowledge and experience make her an invaluable asset to the City team.“ 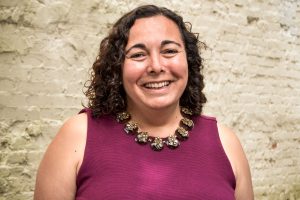