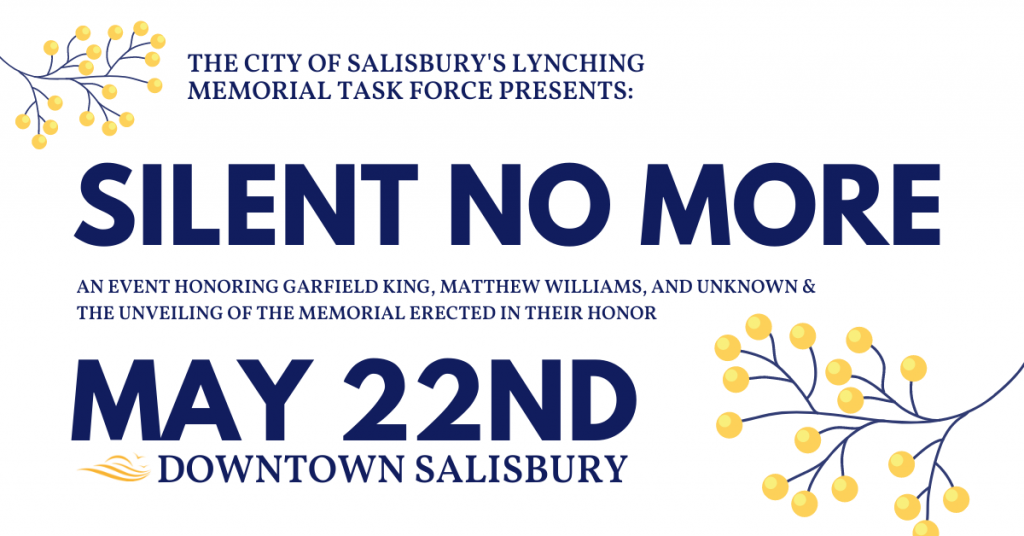 Beginning at Noon and leading up to the unveiling will be a symbolic march from TidalHealth Peninsula Regional’s parking lot at the corner of Rt. 13 and Carroll St. to the Wicomico County courthouse. This is the same route that lynching victim Matthew Williams was dragged before being unjustly and violently lynched in the heart of Downtown Salisbury.

The march will be followed by a symbolic soil collection from the site where Matthew Williams was lynched. A jar will be filled for each of the three lynching victims in Salisbury’s history. The public is encouraged to participate in this soil collection and transfer from 1:15-3:00 PM.

The official unveiling ceremony will commence at 3:00 PM with speeches from local leaders, descendants of the victims, representatives from the Equal Justice Initiative, and members of the City’s Lynching Memorial Task Force. All aspects of the event will be live-streamed via the City’s Facebook page and available to watch throughout the day.

In January of 2020, Mayor Jake Day announced that he would be accepting the recommendation of the City’s Human Rights Advisory Committee to establish a Lynching Memorial Task Force to facilitate the creation of a permanent monument in honor and solemn remembrance of the three American citizens who lost their lives at the hands of lynch mobs in Wicomico County.

“The events which led to the deaths of these men represent the darkest, most despicable acts of which we are capable,” said the Mayor. “It’s not enough to tell the world that we’re better than these acts, and then just try to move past them. What we have to understand is that the scars left upon a community by coordinated acts of mob violence don’t heal overnight. They don’t heal over decades. They can only begin to heal when we acknowledge and address the reprehensible acts themselves. And, most importantly, the three men who died deserve basic human dignity. They were denied that. By erecting this monument, we are doing what we can to try to give it back.”

Funding for this memorial was made possible by the Equal Justice Initiative, which was established in 1989 by Bryan Stevenson, and operates based out of Montgomery, Alabama as a non-profit organization. They are committed to starting conversations, shining a light on injustice, and changing the overall narrative about race in our country.

To learn more about the Equal Justice Initiative, their community projects, and their physical locations and memorial in Alabama, please visit https://eji.org/.

* Media clearance is required for any media that plan on attending the events held at TidalHealth. Please contact Roger Follebout, Director of Strategic Communications at TidalHealth by emailing [email protected] or calling 410-543-7142