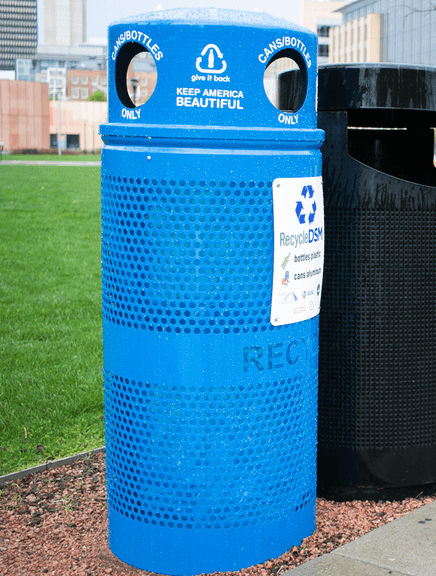 Salisbury, MD – Mayor Day is pleased to announce that the City of Salisbury has received a grant from the Coca-Cola Foundation and the Keep America Beautiful Public Space Recycling Grant program.  The City of Salisbury is one of five organizations nationally to receive this grant and will use this opportunity to establish a public space recycling initiative for all City events.  Specifically, the grant, which comes in the form of 30 recycling bins, will form the backbone for zero-waste activities at the National Folk Festival, the Salisbury Marathon, and other local events.

The City of Salisbury is currently using repurposed storage barrels for its event recycling bins.  The City’s Field Operations Department has cleaned and sanitized the barrels and outfitted them with recycle markings, but despite these efforts, the barrels still bear no distinct resemblance to what most people would recognize as a standard recycling bin.  Resultantly, the bins are often mistaken for trash cans during City events, making them ultimately counter-productive to recycling efforts.

With the new bins, recycling at City events will be more easily recognizable and accessible for attendees.  Event waste areas will be heavily signed with trash, recycling and composting labels to help attendees understand where each material belongs.  These signs will also be visible from farther away to mitigate participant frustration at not seeing a trash/recycling bin nearby.  For large City events, volunteers will staff every waste/recycling location to help community members understand what can and cannot be recycled. The City will use this same plan at a smaller scale for other events throughout the year, such as 3rd Friday, 1st Saturday, and the Downtown Salisbury Festival.

“It is our mission to make recycling as easy as possible at every opportunity, whether that’s curbside, or at City events,” said the Mayor.  “The bins we’re receiving through this grant will not only improve how we manage recyclable materials at gatherings, but they will also be integral in helping us make the National Folk Festival a zero-waste event during its 3-year residency in Salisbury.  I’m grateful for the grant from the Coca-Cola Foundation and Keep America Beautiful, and I’m thankful for our staff who pursued it.  Two key components to our becoming one of America’s great small cities will be our ability to recognize opportunity, and being able to build partnerships between the City and business, and this grant award represents both of those things. “